Hosanna to the Son of David! Blessed is he who comes in the name of the Lord! Matthew 21:9

When an advertiser altered a photo of Michelangelo’s famous marble sculpture of the biblical hero David, Italy’s government and gallery officials objected. Picturing David with a military rifle slung over his shoulder (instead of his slingshot) would be a violation—“like taking a hammer to it or worse,” a cultural official said. 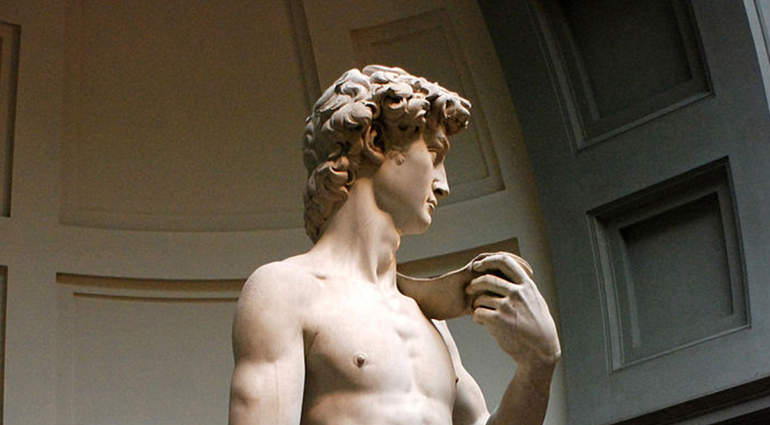 In first-century Jerusalem, David was remembered as the shepherd-songwriter and soldier-king of Israel’s fondest memories and greatest hopes. Prophets foretold that David’s descendant would finally defeat the enemies of Israel. So, centuries later, when crowds welcomed Jesus as the Son of David (Matthew 21:6–9), they were expecting Him to lead the revolt that would overthrow their Roman occupiers. Instead Jesus knocked over the tables of temple money-changers to restore His Father’s house as a house of prayer for all nations. Israel’s leaders were furious. This wasn’t the kind of Messiah and Son of David they were looking for. So without realizing what they were doing, they called for Roman executioners to take a hammer to the hands and feet of the true glory of Israel.

Instead of stopping them, Jesus let Himself be lifted up on a cross of shame—defaced and disgraced. Only by resurrection would it be known that the true Son of David had defeated His enemies with love and enlisted the children of all nations to spread the word.

Father in heaven, it’s hard to admit. But it’s true. We get so confused. We try to protect the images we love more than the love You consider priceless.

By Mart DeHaan | See Other Authors

Establishing Jesus as the Son of David is critical to Matthew’s gospel account. He begins his gospel by saying, “This is the genealogy of Jesus the Messiah the son of David, the son of Abraham.” This description traces Jesus’s lineage through Joseph back to David and beyond. Additionally, in Matthew’s gospel Jesus is called the Son of David by two blind men (9:27), a Canaanite woman (15:22), and two more blind men (20:30–31). Since the theme of Matthew’s gospel is that Jesus is the King of the Jews and Matthew’s primary audience was the Jewish people, it was important for Jesus to be identified as the Son of David and heir to David’s throne. Jesus’s royal identity makes it all the more tragic that the response of the mob at His cross mockedHim as King of the Jews (27:29, 42) instead of placing their trust in Him.

What is your response to Jesus?